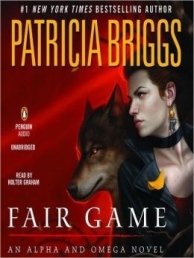 If you like dark werewolf tales told in a darkly sexy voice, I urge you to start at the beginning with Briggs’ Alpha and Omega series. In this third book alpha dominant Charles Cornick and his newly mated bride Anna Latham are settling down with his remote Montana mountain pack. Their uneasy relationship is about to be tested anew. Charles’ father Bran is the Marrok, ancient alpha of all North American werewolves. Charles had been the Marrok’s lone wolf enforcer for hundreds of years when he rescued Anna from an abusive pack and his wolf claimed her for his mate. Since Bran recently revealed the presence of werewolves to the world he’s adopted a zero tolerance policy for impolitic misbehavior. Charles has become reluctant executioner of immature werewolves for malfeasance that would have allowed them a second chance in more lenient times.

As a rare omega wolf, Anna is highly prized for her innate ability to empathize with and calm her kind. She is the only one who sees that Charles is severely distressed because of the work he must do. Anna is also aware that Charles is trying to spare her his agony by closing down his end of the mating bond. She appeals to the Marrok who agrees to give Charles a much-needed break by sending him to help the FBI catch a serial killer preying on werewolves and fae. Charles and Anna fly off to Boston and in a stroke of genius the Marrok assigns Anna the role of FBI liaison and Charles that of her bodyguard. I loved hearing Anna’s confidence grow and her personality blossom as she plays an important role in the investigation. Holter Graham clearly conveys Charles’ imposing size and forbidding demeanor. He adds a deliciously deliberate I’m just a big dumb guy with impressive biceps message while Charles has too much fun standing behind Anna pretending to be a clueless hunk of man meat. Kudos to Briggs for forward movement in the story arc and for satisfying, organic growth in the series regulars. And applause to Holter Graham for getting it.

Holter Graham is a supremely talented narrator who makes it all sound seamless and easy. He employs an easily recognizable distinct voice for each character and he sounds sublimely comfortable with material that he knows very well. A good number of parts are in play; a large contingent of law enforcement types as well as the local wolf alpha, the fae leader, plus a bevy of suspicious characters and villains. Graham never misses a step and I never lost track of who was speaking. Amazing!

An absolutely spectacular denouement caps off the story and it’s so cool that I’m not even going to hint at what happens. Graham’s intuitive delivery adds to the jaw-dropping surprise. Don’t miss it!
Totally loved the book and the audio.
FULL MOON for Patricia Briggs and for Holter Graham

What say you? Cancel reply

MY MOONS…let me explain them

A+ BLUE MOON An eleven. No greater love.
A FULL MOON Love it!
B 3/4 MOON I like it!
C+ DARK Enjoyed it in spite of myself.
C HALF It's not you, it's me. Really.
C- WAXING Coulda been a contender.
D QUARTER Boring/derivative/trying too hard.
F SLIVER Fatally flawed #fail

Reclaiming my reviews from all over the web…

"Can I just have one more Moondance with you?"

Happiness is a Book
Hot Listens

A place for romance audiobooks

" you know how many hot books I own"

Thoughts about books from a romance addict.

Books... Injected Into Your Faceholes.

heroes, heroines, and books that demand to be taken seriously

Miss Bates is Austen's loquacious spinster in Emma. No doubt Miss Bates read romances, among other things ... here's what she would've thought of them.