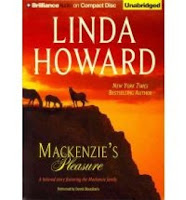 In this third installment in Linda Howard’s Mackenzie family series, youngest son Zane is tasked with taking his SEAL team into hostile Libya for a stealth rescue of a kidnapped ambassador’s daughter. While this book was originally published in 1996 by Silhouette Intimate Moments, Howard deftly shows how to create a beloved classic that stands the test of time, as relevant and believable and romantic today as it was back then.

Zane Mackenzie is a dream man. He’s a warrior patriot, supremely competent and confident, smart as hell, handsome as sin, patient, loyal, and loving. This is not a complaint. Barrie Lovejoy, being pretty smart herself, once rescued by such a delightful specimen of manhood, knows that he’s The One for her. Fearful that they may not make it out of Libya alive, Barrie asks Zane to make love to her. And what a love scene! Zane is a generous, ideal lover and their lovemaking ranks as one of the most memorable and erotic scenes I’ve ever read. I fell in love with Zane right along with Barrie.

The charm here is in the seamless story of two people who meet, fall in love, respect one another and commit. No bickering or games or silly misunderstandings. The prologue and epilogue with generous servings of Mackenzie family togetherness and magic are icing on the cake. I am a sap for the Mackenzies and vigorously pimp them every chance I get. Start with Zane’s parents Wolf and Mary in Mackenzie’s Mountain. Is that Adrian Paul on the cover? I think so! Linda Howard has said that she won’t write a third generation of Mackenzie stories because she couldn’t bear to have Wolf and Mary die of old age.

Narrator Dennis Boutsikaris does an excellent job conveying Zane’s steely calm and resolve as a SEAL team leader. But works so well for Zane doesn’t work as well for Barrie. It’s a tradeoff I can live with. His style is more reader than performer. That said, I read and listened to Mackenzie’s Pleasure I don’t know how man times and it still gives me the warm fuzzies.

BLUE MOON (A+) for Linda Howard’s book. It had such an impact on me when I discovered it. For Dennis Boutsikaris a FULL MOON(A) because listening to this audiobook always makes me feel good.

What say you? Cancel reply

MY MOONS…let me explain them

A+ BLUE MOON An eleven. No greater love.
A FULL MOON Love it!
B 3/4 MOON I like it!
C+ DARK Enjoyed it in spite of myself.
C HALF It's not you, it's me. Really.
C- WAXING Coulda been a contender.
D QUARTER Boring/derivative/trying too hard.
F SLIVER Fatally flawed #fail

Reclaiming my reviews from all over the web…

"Can I just have one more Moondance with you?"

Happiness is a Book
Hot Listens

A place for romance audiobooks

" you know how many hot books I own"

Thoughts about books from a romance addict.

Books... Injected Into Your Faceholes.

heroes, heroines, and books that demand to be taken seriously

Miss Bates is Austen's loquacious spinster in Emma. No doubt Miss Bates read romances, among other things ... here's what she would've thought of them.